I am so lucky to be able to travel with work.   As exhausting as living on busy commuter trains or sleeping in hotel rooms can be, it also affords me the opportunity to visit places that I would perhaps not be able to afford myself.

Travelling has become a preoccupation for me; no sooner have booked I one trip, I’m researching the next.  This year has already seen weekend UK breaks to Devon and Liverpool, a work trip to New York, and a city break to Seville.   Next week I’ll be in Granada and December will see a mammoth holiday to Cuba for the Havana Jazz festival and an excessive amount of lounging by the sea.

As if this isn’t enough, I’m already planning next years trips: Macedonia, Italy and the Netherlands are all high on my list, and perhaps I’ll even finally get to St Petersburg – a plan that has been pushed back a few too many times.

But enough of future plans, your here to hear about Berlin … 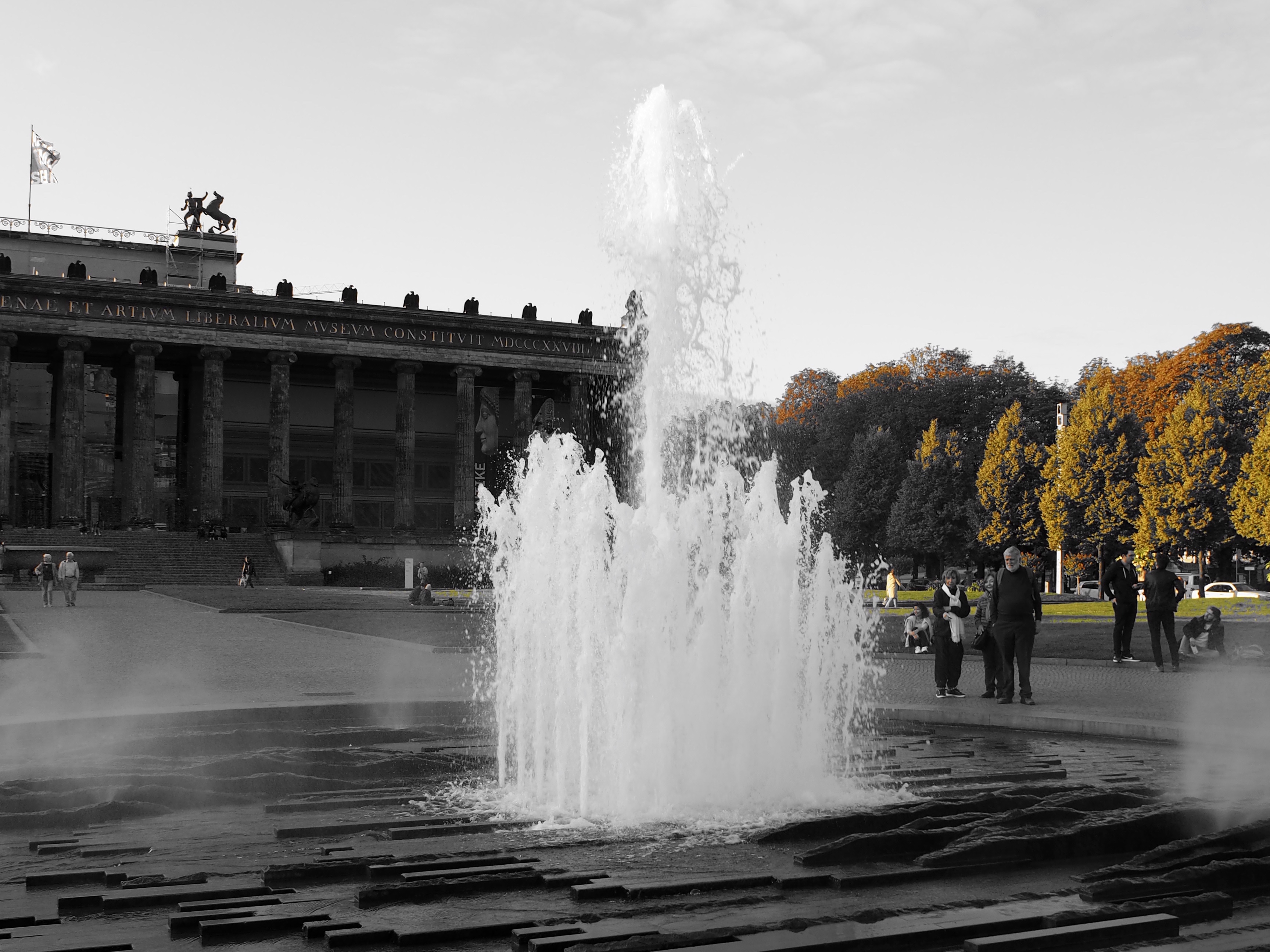 Berlin is an impressive city.

Bigger than New York with less people, the streets are wide and pavements vast.   There are no crowds, the U-Bahn (Berlins transport system) is fast, efficient and largely empty (at least by the standards of London’s tube) and there is scarcely a high-rise building in site.

There are parks at every corner and the city has retrained its recent history, reminding you of its turbulent path at every turn.

Because of this, I can’t say that my brief walking tour of Berlin was enjoyable as enjoyable was not the right word.   Instead, my exploration of the City was moving.

The memorials to those taken during National Socialism are spread across the city – the main are easy to find, nestled amongst over tourist traps and serving as a stark contrast to the green surroundings of imposingly sterile hotels.   But, as walking the city, especially the leafy suburbs, be certain to look where you tread as the pavements are lined with small, engraved memorials to those persecuted under the Nazi regime.

The Memorial to the Murdered Jews of Europe is definitely a place that you have to walk through if in Berlin but be prepared to be appalled at the touristy outskirts of the memorial.   I certainly felt disgust at the teenagers sat drinking Starbucks on the blocks meant to represent those killed under the Nazi regime – the revolt only depending when I realised people were taking smiling and posed selfies.

If you want to see why this is so disgusting, view the images created by Shahak Shapira who reveals just how disrespectful many of the tourists are when visiting the Memorial.  You can read the story behind this photographic project here.

My advice for visiting the memorial is to walk straight through the crowds to the middle of the Memorial and then take the time to wander through.

For me, the magnitude of the memorial really hit me when I was right in the centre, wit the concrete blocks towering over me and making me feel that there was no way out of the mass of blocks.  It was disorientating, the light lessened, and the floor un-level causing  me, and those around me, to stumble and lose their way.

This design really focuses your thoughts on those who went through such a terrible experience, those who lived and died because of heinous ideals.  For no real reasons other than hatred.

Remnant of the Berlin Wall

Remnants of the Berlin War are also found across the City, a testament to the families and people divided during the Cold War.

The wall is smaller than I expected, in terms of height, but stills stands as a stark reminder of the recent divide and opposition in the city.

Perhaps the most imposing memorial I found in the city, is the Soviet War Memorial for fallen Soviet soldiers during the Second World War.

It is a large curved monument embossed with gold lettering and emblems.   It feels vast, severe and imposing with a blanket of red poppies in front of the memorial.   I don’t know if the poppies are there all year round but even without, the memorial is truly Soviet in stance and style and definitely worth a wander through Tiergarten to find.

There are, of course, a host of tourist traps to visit when in Berlin.   Checkpoint Charlie is heaving with eager tourist photo-snappers (like myself) but has little heart.   I was most amused by all of the cars trying to dodge fellow tourists who seem to have lost all sense of traffic safety.

Brandenburg Gate is another example of an imposing structure swamped with tourists, it has the Reichstag (the German parliament) building sat immediately behind which you can enter and explore the astounding glass dome that looks such a severe counterpart to the older parliamentary building.

Perhaps my favourite part of Berlin is the Lustgarten, a small island nestled in the heart of the River Spree and covered in Museums.   Sadly, I didn’t have time to visit any of the Museums as I really did only have half an afternoon to explore but I’ll be sure to go back soon. 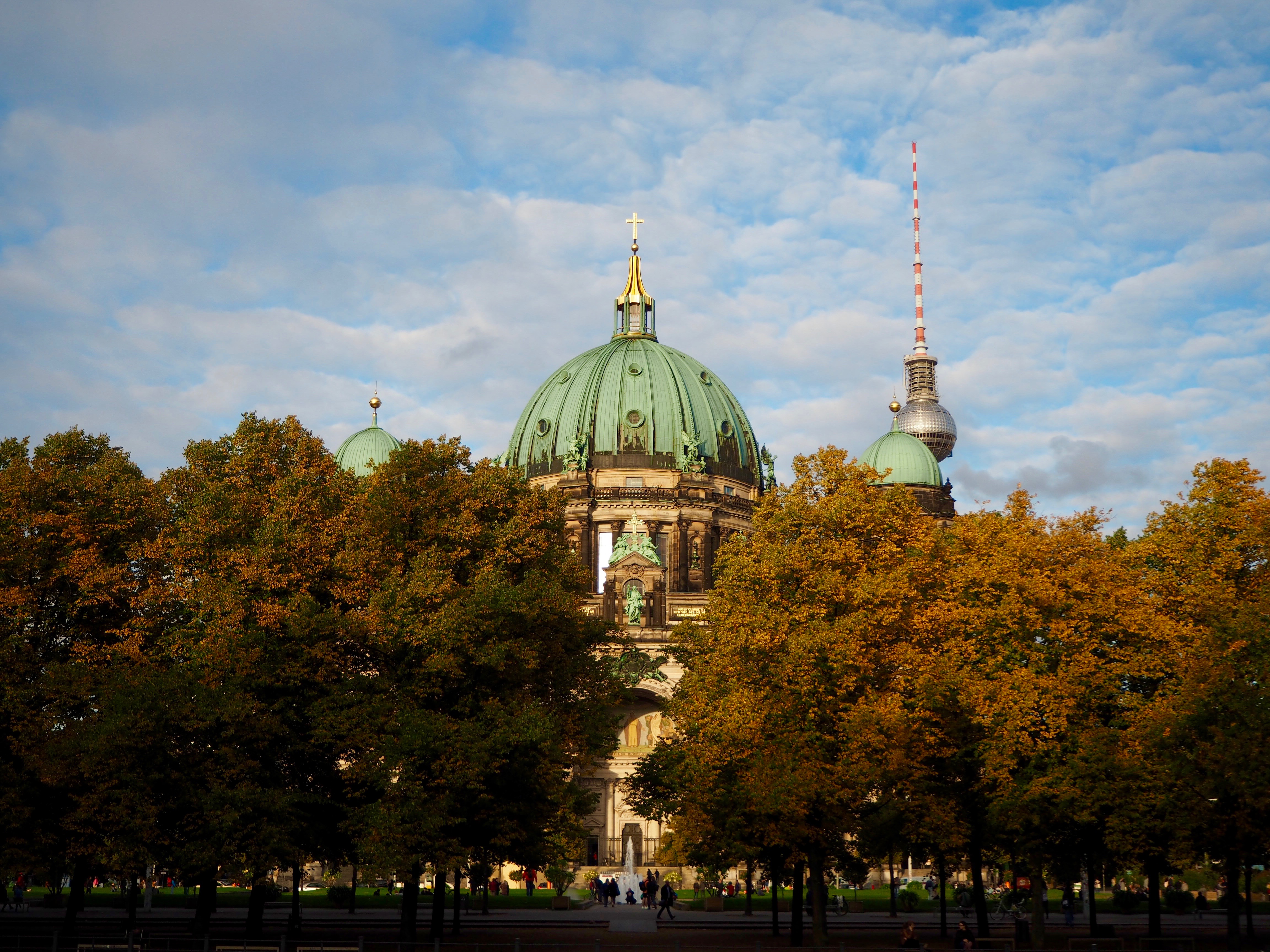 The views on this island are spectacular; with a huge neo-Renaissance Cathedral dominating the skyline and surrounded by manicured gardens and neo-Classical museum buildings.

It was a sunny day and there were many people picnicking on the grass or benches on this island and the golden leaves of autumn looked amazing against the gilded church.

As I’ve mentioned, Berlin is vast and some of the best places to eat are outside of the centre.  The U-Bahn is really easy for getting around and, paired with local friends, I was lucky enough to escape the tourist centre for two nights of my stay.

What I found is that Berlin isn’t known for traditional German fare.  In fact, I was strongly advised to avoid German-looking pubs as they were often bad-tasting tourist traps.   So here is where I ate.

A great little Mexican with scarce, industrial decor and great Tamarind margaritas.  They have a small but great range of tacos and mouthwatering specials.   They also do Cantina fries which are my absolute favourites.

With low lying, bamboo-style benches and great steamed buns, this cafe serves fresh and tasty Vietnamese food and a variety of teas and juices.   The seating outside is warmed by lanterns and food was scrumptious.

So this the exception of the restaurants.   It’s pricey but worth it.

In the heart of Mitte, just down the street from Gendarmenmarkt, this Sushi restaurant has a circular bar in the middle with tables spreading outwards that allows you to see your sushi being prepared fresh for you.   There was such an impressively large menu that I was gutted to be alone and unable to try everything!

Sadly, that is all I had time for in Berlin this time.

Travelling with work is a blessing on a bank balance but a curse on the time spent in a new city.

I will, however, be back.   Not only to catch up with some great friends who are living over there but also to experience this city in a greater depth as it truly was intriguing!

You may also enjoy:

This site uses Akismet to reduce spam. Learn how your comment data is processed.